Back in 2015 I wrote a blog about how Castor started and grew from 5 to 1,000 studies. We thought it might be interesting to give you a brief update on what has happened since then.

So what happened between then and now?

In 2015 we closed our first deal with an academic institute, Radboudumc. This allowed us to accelerate our growth and bring in more researchers. From that point on, we managed to consistently bring in new (academic) hospitals, mostly through site licenses. Next to that, we saw strong growth in the number of customers signing up with individual research projects. Most of which onboarded themselves and went live with their study without even interacting with us!

This extremely scalable growth, combined with our strong growth in recurring revenue, made it possible to continuously invest in the product and even start on R&D activities related to standardizing data (FAIR data). This put us in a great position to apply for grants. And after completing the move from our old 60m2 office to a 175m2 office across from the Academic Medical Center, that’s exactly what we did.

Our 2016 office warming at the Paul van Vlissingenstraat

After the office move in 2016, we applied for Horizon 2020 SME Instruments program. This grant program was set up by the European Union to stimulate the growth of innovative European Small and Medium Sized Enterprises (SMEs). We decided we were a good candidate for one of these grants, although we knew our chances were very slim. Much to our surprise, after our second submission, we were among one of the approximately 1.5% of SMEs that were selected for this grant. This meant the EU would grant us a staggering 1.1 million euros. This amazing event helped us accelerate our growth even further and put us firmly on track to have real impact on medical research worldwide. 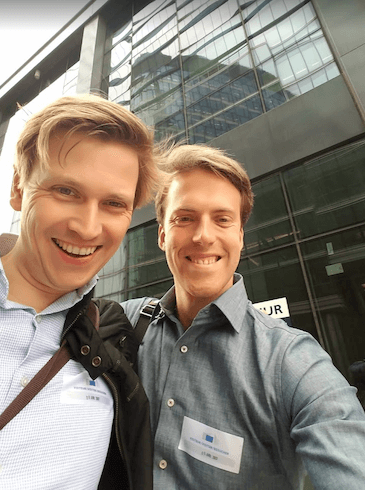 Castor COO (Rob Konterman) and I visiting Brussels after being awarded the SME grant.

After the first tranche of the grant funding came in, we started recruiting heavily and working hard to maintain our growth. As a result we had to move offices again, putting us in a 275m2 space in the same building. Of course, we celebrated this move with our traditional office-warming! Cumulative number of studies created in Castor EDC until the end of 2018 Q2.

We started 2018 strong by winning the European Tender for a Data Capture System for the LUMC (Leiden Academic Medical Center) and by making an important decision: we wanted to accelerate our growth outside of the Netherlands. When exploring ways to replicate our local growth in the UK and the US, we determined that the required sales and marketing effort would be very expensive. We could either continue our organic growth and postpone any substantial efforts in the UK and US, or we could raise money from an investor. We decided on the latter in order to optimize our chances of being first to market and gaining a lead on our competitors. We successfully managed to raise a €5.3M Series A from INKEF Capital and with that, started on a new and exciting path for our company.  We can’t wait to see what comes next!